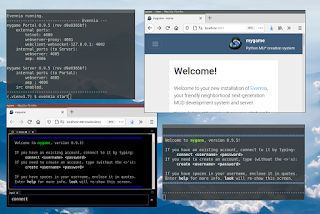 As of today, Evennia 0.9.5 is out. Evennia is a Python based library and framework for creating text-based multiplayer games (MUD/MU*).

This is a gradual improvement halfway between 0.9 and the upcoming 1.0. So if you have been keeping up-to-date with the master branch of Evennia over the last year you will not notice much difference from this release (time to upgrade if you haven't been keeping up though!).

While an interim release, there are still a lot of things that has happened since v0.9:

EvMenu is a powerful system for creating in-game text menus.

The bigger change with 0.9.5 is that we are moving to a new documentation system. The details of the long road to do this is documented in my prervious post. The point is that we are stopping the use of the Github wiki in favor of statically generated documentation hosted on github pages. At the same time we also move the old evennia.com website from Google-sites to Github.

As for the docs, they will be maturing for a long time still. The old wiki will not be updated anymore, but it will also not be going anywhere in the short term. Version 0.9.5 of the docs is pretty much a copy of the wiki and I hope to not have to spend too much more work maintaining it since the wiki is still around.
New updates and documentation features will primarily be happening in the 1.0-dev version of the documentation. This will include refactoring all pages as well as a new intro-tutorial and many other things.
But that's for future blogs ...

Posted by Griatch at Saturday, November 14, 2020 No comments: